The value of patience and persistence is one lesson citizen advocates learned from the state’s decision to grant the headwaters of the Conasauga River, in north Georgia, the highest level of protection available under the federal Clean Water Act. 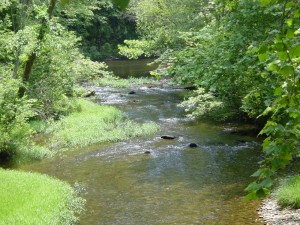 Environment Georgia wrote the latest chapter in the book on citizen advocacy when it prevailed in an effort to grant the highest level of protection to the headwaters of the Conasauga River. Credit: Environment Georgia

Environment Georgia has written the latest chapter in the handbook on how to influence public policy. The effort that started in 2007 ended with the Georgia Board of Natural Resources voting Aug. 25 to designate an 11-mile stretch of the Conasauga River as a Tier 3 waterway with the Outstanding National Resource Water designation.

In the end, the group didn’t get all the protection that it wanted for the Consauga River. But members learned a lot and set the stage for future efforts to protect waterways and land. And the effort cemented relations with partners including landowners, the River Basin Center at the University of Georgia, and various environmental organizations.

“The most important lesson we learned is that if you’re forging entirely new territory, it’s best to figure out the easier ask and come back later for more,” said Jennette Gayer, the state advocate at Environment Georgia. “We scaled back our original proposal with the idea that once we get the first designation done, it will be that much easier to get the next ones.”

The notion to protect the Conasauga River started with a general conversation about protecting greenspace and wild areas.

“The basic idea was, ‘You know, we are letting a lot of these special places slip away without taking a minute to fight for them,’” Gayer said.

rivers. The original plan was to protect the rivers from their headwaters all the way to the state border with Tennessee. The group wasn’t prepared for what came next.

“We naively submitted a petition and thought it would take a year to go through the process,” Gayer said. “We found out that’s not the case. Not because of intense opposition, but creating Tier 3 had never been done in Georgia before. If something’s never been done, it’s kind of trickier.”

“We got Fannin, Murray and Gilmer counties to pass resolutions saying they support the idea,” Gayer said. “It was kind of fun because we met with owners of land the river passes through. These are in the Alaculsy Valley [in Murray County] above the Cohutta. The people have been owners for generations and see themselves as being stewards of the land and liked the idea of being part of the big ‘first ever’ designation.

Georgia has designated the headwaters of the Conasauga River, an 11-mile stretch that goes almost to the Tennessee border, as the state’s first “Outstanding National Resource Water.”

Along with local landowners and commercial interests, the stakeholders include the U.S.D.A. Forest Service, because the rivers are in the Chattahoochee National Forest.

“We got into the weeds about how the Forest Service manages land,” Gayer said. “One thing that came up is there are lot of places where a trail crosses over a river, or over a stream that creates the river. If you have to reroute a trail, you’ll end up with sediments in the river, which is changing the quality of the river you’re trying to protect.”

As time passed, Environment Georgia decided to scale back the original proposal. Jack River fell by the wayside and the proposal for the Conasauga River was reduced to its 11-mile headwaters. One reason is that an early thought to protect a hole where snorkeling is popular was abandoned because Tier 3 protection isn’t appropriate for an area that is a recreation destination.

To accommodate the future work by the Forest Service, to reroute trails and camp areas, the state board added the following language:

Gayer said Environment Georgia will identify a similar project in the future. Members will use the lessons learned from the effort to gain Tier 3 designation for the Conasauga River.

“Our next step will be to take a step back, and figure out the steps to achieve this designation, figure out if people want to do this along a river or stream, and map other places where we could designate ‘Outstanding National Resource Water.’

“It might not have the exact conditions, but it might have something worth protecting and we can help move it toward being an outstanding national resource,” Gayer said.